It survived four trips to the woods this week, cooked over four fires, made many more than four batches of popcorn, but by the end of the week it was hanging apart. About time I made a new one. The popcorn maker is basically two sieves with a few refinements:


The stick has a few notches carved in it to help stop the wire from slipping, I have used string in the past but you run the risk of setting string on fire, wire is much better and this bit of wire has been reused for this purpose a few times now. This must be popcorn maker mark #6 or #7. Mark #2 and Mark 5 were both given away. 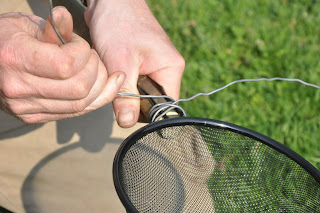 Cut off a piece of the wire. About 2 inches (5cm) should be plenty. With the rest of the wire,bind the handle of the first sieve onto the stick, starting from the centre of the wire. 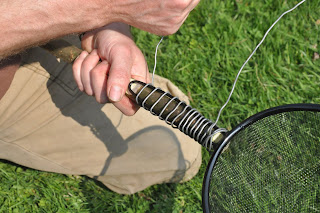 Try and make it as tight as possible and tuck the sharp ends over and hide them inside the binding. 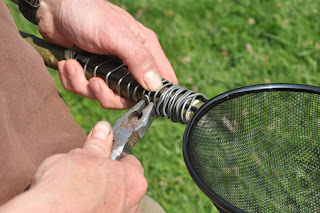 Make sure you leave a loop at the bottom of the binding where you can tuck the handle of the other sieve to hold the two together when you are ready to pop. 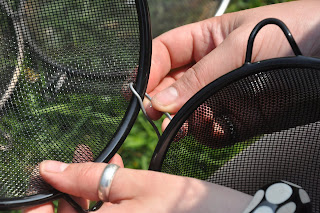 Using the short section of wire you cut earlier, poke through the holes of both sieves to make a loop at the top of the sieves that joins them together and will act like a hinge. 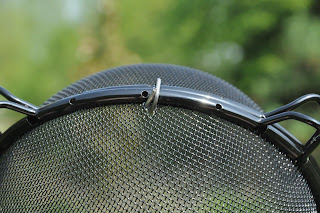 Below you can see the loop at the end of the sieve handle. This is now really sturdy and will withstand all sorts of adventures. 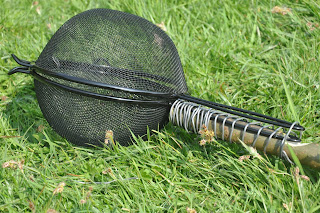 The knack is not to put too many corn kernels in the sieve. A small handful is plenty. Then hold the sieve above the embers of a fire. I learnt through bitter experience not to put them above the flames as the sieve melts or the kernels scorch or dramatically a whole sieve full of popped popcorn can catch fire. Regular 'shoogling' is also vital to keep the popcorn form burning.
The advantage over a pan for me is that you get to see exactly what is happening. I love the way the children listen so patiently for that first pop, the woooo hoo excitement of when poppping in full swing and the language that children use trying to describe what effect the fire is having on the corn kernels. I also love that you don't need any flavour on the popcorn, the smoke gently flavours it.
Posted by Lily Horseman at 20:12