Yes, and... Play and learning.

Sometimes I feel like describing ‘play’ is like drawing the wind. You can recognise it, you know what it looks and feels like, but it is somehow nebulous and hard to pin down. I have been working in the field of play and playwork for nearly fifteen years and yet I have still to find just one way to describe what play is. I love the fact that all you need is a handful of playworkers (and maybe a bottle of something) and ask, “What is play?” and they’ll be at it for hours!

A few weeks ago My friend Kirsty and I delivered a workshop for the Institute of Outdoor Learning on playfulness and flow states. We were exploring how an understanding of theories can help learners in a range of environments Looking for
"Play' is a term employed in psychology and ethology to describe to a range of voluntary, intrinsically motivated activities normally associated with recreational pleasure and enjoyment”1
Which sums up the feeling we were trying to convey through our workshop, that children and young people get so much out of being able to direct their activities into something that holds their involvement, that it is important for children and adults too to be allowed to play. In recent years I have been doing more work in formal learning environments and I really see the value of the spirit of playfulness I bring to the work I do. The aspect of play or playfulness that really appeals to me, especially when I was considering how it motivates and engages learners, is the state of immersion and engagement that a child at play can enter, when the real world is lost to them and they understand totally what the rules are. Even if there are other agendas that the teachers or facilitators are trying to manage, there are still benefits to following the children into that zone, that place of immersion. 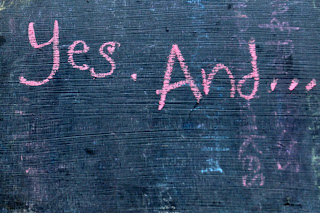 I heard a comedian talking about improvisational comedy and  he was saying how improv can be made to work if the people taking part in it follow the rule of “Yes! and....” basically, if you take whatever is offered and try to build on then you get to a more interesting, and in their case funny and surreal, place. That really strikes a chord! I know from my own teaching, training and playing that when something comes up from the group you have two choices, one is to try and shut it down and bring people back. The other is to accept what is offered, “Yes! and....” to go with the new direction. Let things come back to the starting point naturally and allow people feel more included and involved with what they are learning. Even when there is a very specific outcome you can still get to the same end point by following the meanders that include other people’s ideas rather than sticking only with your own route.
Playfulness for me is about being responsive and flexible, embracing the unpredictable nature of the world and the people in it. What do play and playfulness mean to you?
Posted by Lily Horseman at 14:58