Child-led learning sounds like it should be easy, just see what the children are interested in and excited by and then follow it. Actually, when you put it like that it is easy and in the context of outdoor learning  allowing the children to lead can be wonderfully simple to implement. There is so much to discover and interact with. It is hard NOT to be learning.  Where child led learning becomes more challenging is in the personal internal battles you face as a practitioner.

I am thinking for example about a time when a group of children decided they would have a ‘bug market’ where they could trade things with each other. They decided they could bring things from home, or trade conkers, interesting leaves and other found natural things.  They asked us to provide materials for signs, sheets to set things out on and they left the session really excited about the upcoming Bug Market.

It was only after they left that we started to realise the gaps we had left open, what sort of things would they bring from home? What were the ethics of trading live insects? Who would decide what trade was fair? How would we agree the rules?
One of the key lessons I have learnt over the years is to never imagine that I am in charge. It can be a real challenge to master my ego, not listen to the voice that says “Well, I know best because I am an adult.”  Or allow the part of me that already sees how this could go horribly wrong to be too dominant. 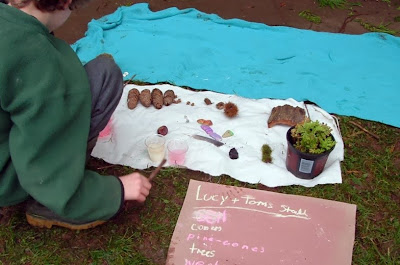 When the children arrived for the Bug Market it seemed that the children had all understood what the rules were to be without me having to get them into a discussion. No-one brought their favourite toys to swap, you don’t have insects in a bug market, (and apparently I should have know this!) and the adult role seemed to be to keep currency moving around as more people wanted to be stall holders than to barter.

But child led learning doesn't start the moment you decide to step back. When I walked into a woodland with a group of nursery children, most of whom had never been in a woodland before, it’s almost like they couldn't see the potential, and didn't know yet how to interact with it. It took a few sessions of going back to those same woods, with practitioners and staff providing encouragement and permission to the children to collect things they saw, asking them to describe their finds and to interact with them, to follow trails of feathers and touch mossy stumps and smooth leaves. Then the children started to notice and to lead. A long worm stopped us in our tracks as we walked up the path. The children are acutely observant, “it is coming towards me,” “now it is going to you,” “it is a letter C for Callum” “it feels sticky, like a fish” They put things in its path to see if that changes the direction it goes in. 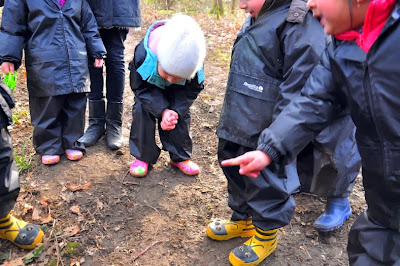 When, during the following session we brought magnifying glasses and pictures of the minibeasts they could find they responded really positively and were quickly immersed and interested. Child-led learning can take time to emerge, as group dynamics settle and the children gain the confidence to lead and to believe their ideas will be listened to.  This is one of the reasons why effective outdoor learning takes place over time.

They start to see your role as a provider of resources, ideas, ways and means rather than the instructor, which can often run counter to the normal relationships they have with teachers and other adults.
The natural environment is an unpredictable place, you never know what you will find. You can plan and prepare for certain learning experiences to take place, and they may happen, but what you cannot plan for and only be receptive to, is the unexpected.

"In preparing for battle, I have always found that plans are useless, but planning is indispensable."
–General Dwight D. Eisenhower

Sometimes like with the Bug Market, the children are explicit about the direction they want to take, sometimes child-led learning comes about by following a particular line of questioning and sometimes an observation is the key. In the first week in the woods with another group, William picks up a sharp stone and uses it like a tool; another child watches him and copies, using a stick with the same motion. It occurs to me they are whittling. Even though I don’t usually bring tools in this soon, their behaviour intrigues me and I bring potato peelers for them to whittle with for the next session.

Outdoor play and outdoor learning provide enough scope for each child to be following his or her own line of enquiry and for them to collaborate with other children and adults. But those internal battles I mentioned... how do you feel about how you are perceived in your role? Not by the children, but by other practitioners, visitors, parents and parent helpers, a passing head teacher or an Ofsted inspector. What happens when the lines of enquiry that the children choose to follow includes squishing living things, making weapons, having battles....?

*This post, written by Lily, was originally published on forestschools.com in Oct 2010 and is republished here with their kind permission.
Posted by Lily Horseman at 12:51