A change to play- based learning. A parent's perspective.

I have been working closely with a school as they went through some massive changes. When I first worked with them in March last year the Foundation stage; nursery and reception class were two separate entities. Hilary who leads the unit, has been inspired by a trip to Reggio Emilia in Italy and the approach they have for their Early Years learning and teaching.
She made some phenomenal changes to their learning environment; merging the space to create a large free flow area, inside and out which hosts 120 children in a rich creative play-based learning environment.
My role has been to take on provocations, projects that has emerged from the children's interests and ideas and also taking small groups to a local woodland. The group I take to the woods those children who have been identified as needing a 'boost' for one reason or another. Children who need additional support, children who might have less confidence or resilience or children who it was recognised would really thrive in the woodland environment. 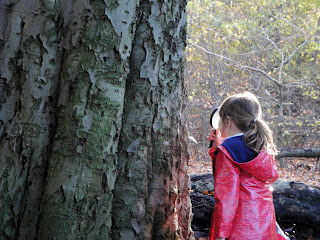 The provocations I have been involved in include a building project, a fire project and at the moment we are bringing a carving project to a close and waiting for a visit from Kim, Rob and billy big saw to realise our carving plans on a big scale.
The transition for the setting hasn't always been an easy one. Staff have found it challenging and some parents were really skeptical. But they have persevered and are just completeing their first year with their new approach.
One of the mums recently wrote a letter, which she and the staff are happy to share. It is so insightful, observant and encouraging. I really applaud the efforts that the school have made in their transition and it is wonderful to see them recognised by the people who matter most in a child's life.
"My thoughts about the changes in Foundation Stage, from someone who had reservations, and is now really happy!
I hope this is helpful to any school or to parents who are thinking about making the same change as that in Carr Manor Primary Schools' Foundation Stage and may have concerns.  I am a parent with 2 children at the school.  My eldest child started in reception 3 years ago. We were very happy with the standard of care and education in reception, the environment was excellent and seemed to deliver everything we had expected for our child starting school.
Two years later our daughter started in reception.  This was the first year the school introduced the new foundation system.  I had a number of reservations.  I had been very pleased with the reception class that our eldest child had been part of, what could be described as a more traditional educational model.  Class room, carpet, reading books, register, spellings, structured learning, set play times.I didn't see the need to change what appeared to be a good reception class.
I was concerned about mixing nursery school children with reception aged children and particularly the effect this might have on teaching the children in reception.  I was worried that my child would lose out, and may be disadvantaged because of being in the same group as younger children. I was also concerned about what might appear to be an extension of nursery, rather than the start of school.  How would she know this was school if it felt like a continuation of nursery?  How would she be prepared for key stage one? I was worried about the size of the foundation stage, it seemed like a huge number of children to arrive on site, and be collected at any one time, 120 children is a lot in one, albeit large, space. I was also a little concerned about the "learning through play" ethos.  My head thought it would probably be a good thing, having read research to that effect.  My heart felt that being given something different was unsettling. Even though I felt uncomfortable about the changes, I did trust the the staff at Carr Manor and believed that they would only make the changes if it was in the children's best interest, however, I did need to be convinced.
One year on I am convinced.  Any worries or concerns that I had have gone away.  I am so happy with this year, more than I could have possibly imagined.
Taking my concerns in turn, mixing nursery age children and reception children together and the effect this may have on development.  Rather than this being detrimental to our child, it has been the opposite.  She has thrived and has relished the role as one of the "older" children, happily taking on responsibility that would not have been available to her in the other system.  She has shown real maturity, taking care of the younger children and stepping up in the role.  This is particularly noticeable as our daughter is the youngest in our family and is rarely "the older one" at home.  I see this as a huge advantage, one that she would not have experienced this year had it not have been for the school. 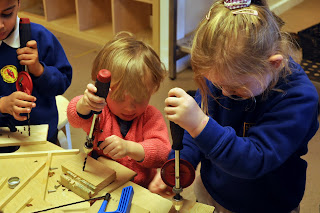 Being in a mixed age group has not had any detrimental effect on her learning.  She has thrived in a less pressured environment.  The way this new system supports children to learn at their own pace and still be stretched is refreshing.  By not putting children under any pressure helps develop their confidence, and helps then to feel able to take risks, and succeed.  For example, she has absolutely grasped the concept of phonics, is eager to read books and does this without thinking by noticing words around her, part of her everyday life.

Our daughter is very clear that she is in reception and other children are in nursery.  She is somehow able to maintain this reception identity and therefore it doesn't feel like a continuation of nursery.   Looking on, I find it difficult to make the distinction.  I have no concerns about that, but I find it interesting that the children do make a clear distinction between the reception and nursery, which I think will be important as they move into year 1.
Even though there are a lot of children arriving altogether, there have been different entrances.  Each group, very clearly has a particular area, pegs, a stage and of course staff giving each group a particular identity.  It doesn't feel like a huge group, even though it is.  There is a lot of interaction between the groups giving a real sense of togetherness.  I know lots of names of children in other groups, all identified by the colour of group they belong to, amazing.
There has been so much creativity on display through the learning.  The children have been given the opportunity to choose topics that interest them.  The highlight for our group was the dancing project.  Born out of the groups interest in the Japanese Tsunami and their wish to help the relief effort.  The group decided to put on a dancing show.  It was unbelievable, inspirational and totally amazing.  Choreographed by the children, we were amazed by their efforts and their enthusiasm.  What an opportunity and what an experience for them all, building a huge amount of confidence and enabling the children to learn in a different way, developing the skills they will need to draw on as they move through the school and develop educationally.
I understand that every child is different and develop at different rates.  I am convinced that our eldest boy would have thrived in this environment.  With hindsight he struggled with the more structured approach.  Our daughter would have probably coped well in that environment, but I know she absolutely has thrived in this new system and I would have no hesitation in recommending the approach, it is brilliant.  Superbly executed by the staff at Carr Manor, who are amazing." 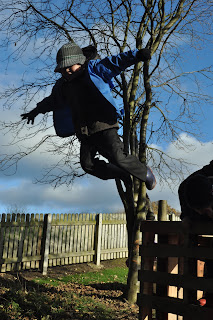