One of the elements I find really rewarding about working with lots of different groups of children and adults in different contexts is that the ideas and inspiration that develops with one group feeds into another and I often find themes emerging at certain times.

As part of my role in the foundation unit of a large school I was involved in a carving project, looking to find things that we could carve in order to explore shaping in three dimensions and come up with a body of work to inspire a wood sculptor. 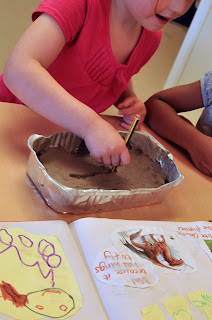 We made sculptures out of clay but this didn't really give the sensation of carving. But by pressing the clay into a tray we could carve into the clay with pencils to make designs, then using Plaster of Paris make a permanent mould of the carving.
I was also working with an afterschool club doing regular sessions in the outdoors. One of the most popular things was the mud kitchen, one of the girls was really enjoying pressing into the mud with leaves to make patterns. This is where one idea, feeds another idea.... 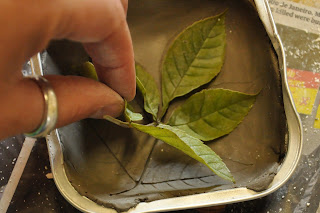 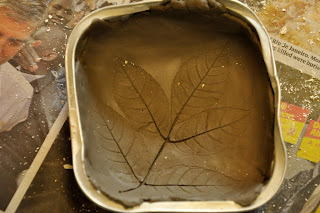 When we were carving dragons one of the boys had used a pine cone to press into the clay to make scales. When the moulded shapes were completed this made a wonderful texture so I took casting powder to the after school club to see if they wanted to experiment with this too. I did all the handling of the casting powder with both groups as it can be a skin irritant and there is an exothermic reaction takes place when the mixture is going off, so precautions do need to be taken. This didn't mean that the children weren't involved in the process and fascinated by all the different states; powder, liquid, solid in 20 minutes is a very satisfying transformation. 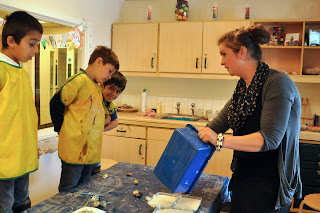 The children were really fascinated to see the transformations in their artworks too. Any elements that were sticking into the clay became reversed, which when using the plants made it more like the original plant. 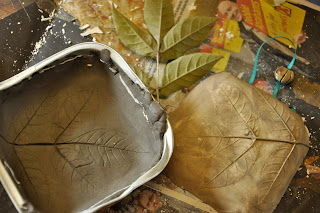 A few children wanted to write their names or initials into the plaster and this was more challenging as you have to write everything backwards in order for it to come out the right way in the finished piece. This took a bit of practice but the clay is quite forgiving and experiments are easily erased. 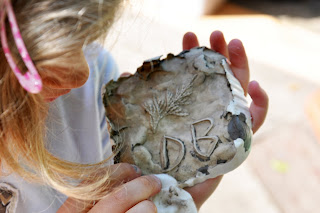 I liked the effect of the pressed leaves the children at the after school club did that I was inspired to have a play myself and make some moulds of my favourite trees. The addition of a ribbon into the still wet plaster meat that these were much easier to hang up.

The children involved in the carving project wanted to paint their creations. By washing the paint afterwards we were able to get a better effect, the paint washes off the raised parts and highlights the low points in a really effective way. 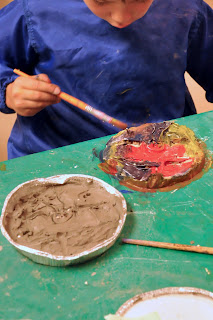 Or by gently wiping the clay away from the high points of moulded parts you can get a similar effect. I like both finished results in different ways. 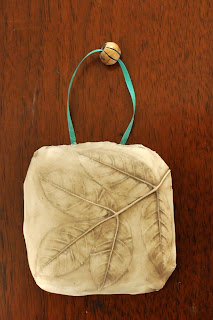 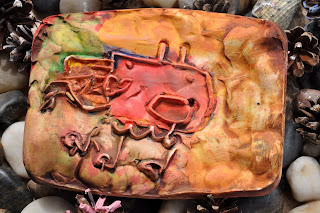 You can see more of the children's finished carvings here.
Posted by Lily Horseman at 14:32