Learning as much in an hour of play....

"You can discover more about a person in an hour of play than in a year of conversation."
— Plato

I recently spent a wonderful 24hrs with my friend and her daughter, my goddaughter R. Now aged six, this is a child I have known since before she was born, we lived all together for a brief time when she was a baby. I met her mum met at a nature play conference and we worked together for a bit and have been friends for years. We get to meet up too rarely as we now live 250 miles apart. But the reason why I am telling you this is because in that short visit I experienced the most extraordinary hour of play.

In the course of my work I observe children at play and play alongside children a lot. Children playing together often talk and discuss the narrative of the frame in which the play is taking place "You are the dog and I am the mum and then the mum says to the baby, so you have to be the baby but I'm still the mum" sort of conversations.

As an adult invited into that play frame, or, as often happens when I take children into the woods, when I am trying to help children establish a play frame in an unfamiliar environment, a lot of talk can take place. I make observations of what is happening, the child shows me what they are doing, they ask for feedback, ask questions, try to work out the boundaries. This is all part of the containment process, of helping children maintain a play frame.

My friend had to go and work for a couple of hours so I offered to look after R. There were a number of options for the morning but R said we should stay at the house and go to play in the little strip of woodland next door. We got up in the morning and my friend went to work. R did a little test of the boundaries.
"I want to watch a programme."
"Ha! the only way we are going to watch TV this morning is if we make the programme ourselves....Oooh actually, we COULD make a TV programme, I have my camera."
"WE could make some TV? "
So we did. R telling stories and singing for the camera, then we went out into the woods and she made a documentary on how to collect things. 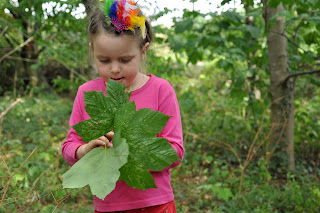 As we were heading back into the house I spotted the stalks on a particular sycamore tree were really long and I pointed them out to R. This was our shared  play cue, she collected a few leaves and started winding them together, I collected a few and threaded them into a long chain. During this I offered the usual sort of statements and observations I might with a child when I was working; "You have threaded three leaves together, I think I might hang mine on this tree." Looking for ways we might extend the play frame, But I noticed that R didn't seem to need these and I stopped. 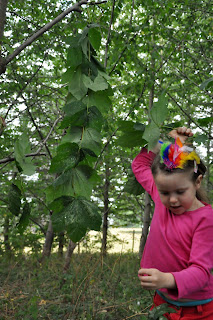 Which gave me an opportunity; I have for a while now had in mind to try and make a geometric cube from leaves. I draw much inspiration from the work of Andy Goldsworthy and as a teenager I saw one of his leafworks boxes in a gallery in the city where I lived. Ever since I had in mind to try and make one. The impetus for which came right back when I recently found one made by another land artist. I've already made one attempt which was a really useful learning process, but the thought of doing something that required so much concentration and time seemed counter intuitive when I was spending time with a lively six year old. 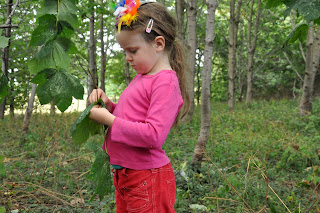 The level of absorption she showed made me loathe to be the one to break it. And we played in parallel she and I. Both in such a state of flow  and absorption I am still unsure how much time passed. 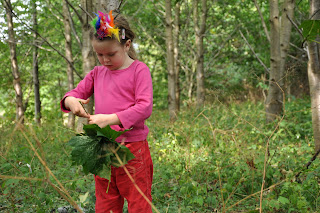 We spoke very little each very focused in the challenges we had set ourselves. 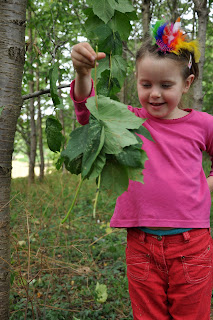 Occasionally delighting when something worked well. 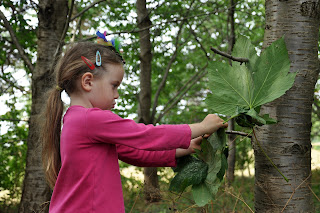 Allow the ideas of the other to inspire us in our own play. 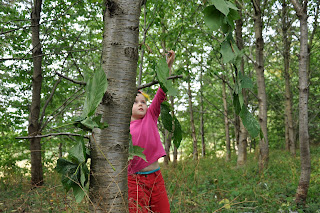 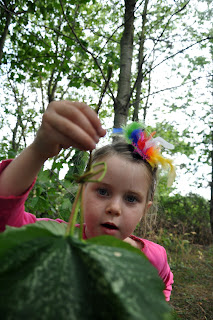 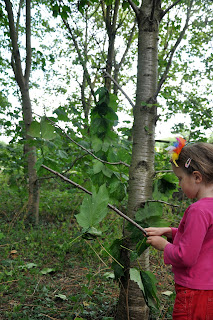 Until we reached a point at which the possibilities had all revealed themselves for now. R made an observation. "The dry leaves are just as good but the brown ones are two crispy."  I had made five corners of the box but run out of suitable leaves. 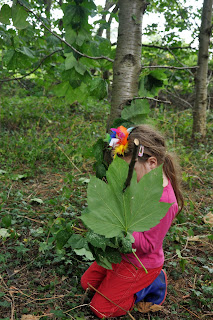 We collected some bits to take back to the house and moved on. The frame which had held us in a state of flow was gone. Naturally extinguished.

I felt as if in that hour of play that I had got to know R in a way that all the phone calls and letters had never revealed. I saw her deep level of ease at being outdoors in nature. I saw how dexterous and creative she is. I saw how motivated and self contained she can be. She saw me too. I explained to her how much I had enjoyed being  in the woods with a child who didn't need talking to all the time and that some children I worked with needed my help a lot more. "So is playing your job?" she asked  "You are good at playing."


Terms used in the description of the play process have been taken from The Colorado Paper by Gordon Sturrock and Perry Else 1998, P8 onwards.
Posted by Lily Horseman at 18:17