Reflections on moving from survival to thrival

I have recently come back from a month long trip deep into the wilderness in NW Ontario, Canada. Which almost explains how quiet I have been here recently. It has been a lot to process.

I have talked before about how I the work I do encourages children to challenge themselves and as an adult who supports that then I should be doing the same. But this trip was more than personal challenge (although there were days like that) It was an opportunity to deeply immerse ourselves in nature, to take things at our own pace for weeks at a time and to adjust our rhythms to those of the world rather than the clock.


My partner and I packed three weeks worth of food into our packs, travelled to a remote little outfitting town just north of the Quetico Wilderness Park where we picked up a canoe and then quietly slipped off into the woods and lakes for three weeks paddling, portaging and a change of pace. It's the second time we have been to the boundary waters wilderness and with over a million acres of lakes and forest with no roads or houses, there is a lot to take in.


This trip was different though, I was trying to explain it to a friend and said "we moved from survival to thrival" I had made up a new word, I admit it. But that sense of moving from just coping and surviving to something greater, I needed a word that described a concept just right. As with all the best things I found that someone else had also come to the same realisation.


One of the key things for me that felt different was our desire to create and how much time we gave to making things. Carving a sculpture from an interesting bit of firewood, making a spoon from a beaver felled greenwood branch, baking... lots of baking, fresh bread and cake every few days and firing our own pottery.


We had been told to watch out for one particular trail between two lakes as it was deep clay and it becomes very difficult to walk across if it has been raining. Inspired by sculptures we had seen in the Museum of Inuit Art in Toronto the thought of a cache of deep clay lured us in that direction.


I have read quite a lot about pit kiln firing and tried a few experiments but we didn't want to make the impact in the environment of digging a pit. So we gradually heated the dried clay things by the fire, bringing them closer and closer to the ember bed, then putting them in the embers. This took about half and hour. 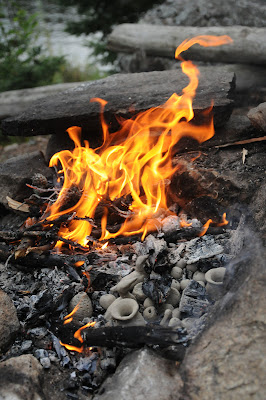 First we added fine twigs and pine needles to the embers to bring the level of heat and cover the clay things, adding bigger and bigger twigs until they were covered and a small fire was burning.

We added larger pine, birch and conifer twigs until the fire burned really hot. This took another half hour or so and even though the temptation and the heat was unbearable we kept the fire burning at a high temperature for another half an hour. We could see everything glowing red in the fire. Despite wanting to peek we let everything cool down slowly before raking the coals aside to reveal our hoard.

Through our experience of thrival I feel like I have managed to empty all the accumulated clutter or everyday experience, strip things back a bit, get a bit of the rawness back in, push myself, to laugh when I have been dragging a canoe all day through an impassable swamp that looks like a river on the map, enjoy, immerse in nature and take time to be. Oh yes that's why I do it. 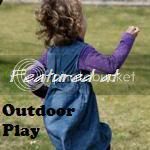