Who goes there? Who went there?

Snow that is covering lots of the UK at the moment and when I've been out and about I can't help keeping my nose to the ground looking for tracks. Walking up on the moors on Sunday (before it got so deep) we noticed a regular little round regular mark, keeping pace with some human footprints.
It took a little while for it to dawn on me, we were following the tracks of someone walking with a stick. Further up the hill was a perfect imprint of a walking pole in the snow. We both gleefully pointed it out "look, look he dropped his stick!"
I've written before about how working with children and nature shouldn't be just about naming  but should also be about engaging and inspiring a love of the natural world.
Children, unless they are brilliant at being still and silent, often miss the opportunity to observe birds and animals in their natural habitat. Tracks are wonderful because  they leave a record of what has happened minutes or hours before you were there. From these you can try and guess what the behaviour was that caused the tracks.
We spotted all sorts of different tracks during the course of our walk:
These large bird prints stomped resolutely down a steep slope and then even more resolutely up a steeper slope. We followed them off as they crossed our path, went round a tussock of grass, then followed a stream bed. On the really steep bits we could also see drag marks of a long tail. This has to be a bird that would choose walking over flying, to walk up such a steep slope. 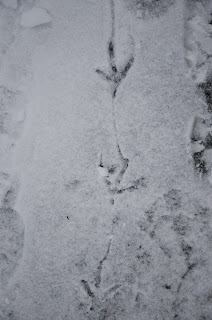 This was something that had a pretty good ability to hop, and a thin tail that dragged on the ground in between it's feet. Maybe it was in a hurry as it crossed the open ground, it didn't seem to bother using it's front feet much. 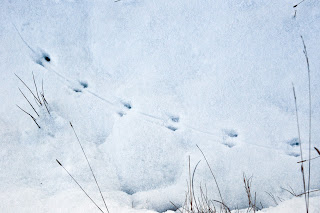 More little prints but these include smaller prints. This means it was using it's front feet as well as it's back feet. It also seems to have changed it's mind and gone backwards and and forwards a few times. 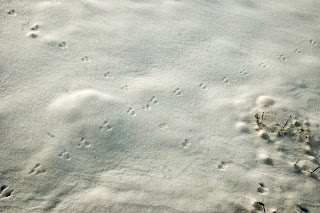 Then with a 'hop, hop, wiggle' it has gone down a hole and under the snow. To try and work out what was going on in some off the prints we even did the actions of what we thought would have made them, looking back at our own prints or imagining and acting out what the animal would be doing to leave prints behind like this. 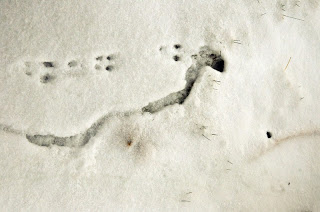 For children, especially those children who learn kinaesthetically, moving and wiggling around is an engaging way to learn about wildlife; what it does, and why it might be doing it.  Focussing on the behaviour rather than just naming the owner can give you entertaining insights into what is going on around us all the time, we just don't normally see the evidence.
There are lots of  guides to UK animal signs available, some can be downloaded from here and here. The Field Studies Council produce a wonderful laminated fold out guide which I find really easy to understand and especially great for lots of children to look together. All the information is laid out rather than being on lots of separate pages. I find Tom Brown's Field Guide to Nature and Survival for Children  really inspiring. Although it is an American book he does a lot to encourage the tracker to think like the animal and observe behaviour from tracks.
Mud and sand are also brilliant mediums for recording who and what has gone before you. I was first really inspired by tracking when I went out into the Namib desert with a tracker called France. Just listening to him I wanted to know everything he knew. He could tell from the sand who had walked next to who, whether it was an old man or a young man or woman. He could tell exactly where the lizard was hiding out, how quickly the oryx were travelling and he told us the most useful skill  a tracker possesses is to tell who exactly had been laying in the sand next to your wife. He had such a keen observational sense it made me look around me in a completely different way. 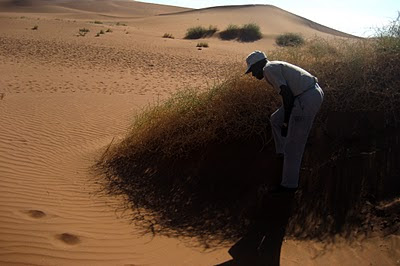 If the only footprints you find around where you live are from cats, dogs and humans then track them! Early mornings or after a fresh snowfall are best, before it gets too confusing. You might spot some tracks on a roof like these that Emma of Sew Recycled saw. The drag marks are from a slinking belly, the paws neatly walking in file, it looks like someone is stalking the birds. 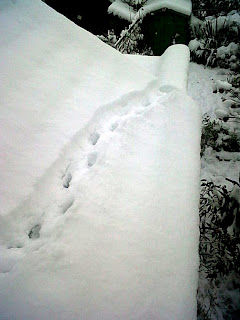 On the left are some prints from a rabbit or hare, the four marks made by the small front feet and the long back feet, I always think they look a bit like a spooky face, so I couldn't resist some additions of my own: 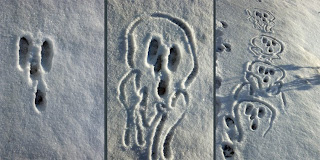 Wrap up warm if it is snowing near you and go and see who and what has been wandering around when you weren't looking. 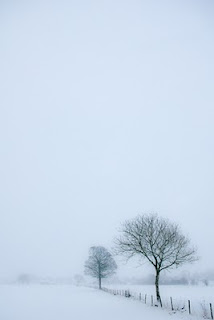