The builders take a break

As the children had their lunch I went up to the treehouse site (if you are new to this project then catch up here and here). I wanted to check things over and see what things looked like without half a dozen small bodies on top of the walls and door frame. A group of girls came out after their lunch and watching them playing in the treehouse distracted me so I didn't get a chance to get any tools out. As more and more children arrived they climbed up and over the walls, which being made from pallets are like ladders.

It wasn't long before the first person tried an experimental leap. 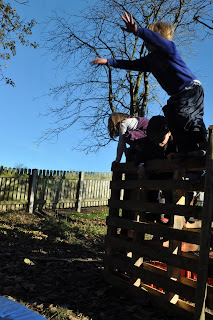 There are a number of blue crash mats in the garden and a teacher and I dragged them over to the treehouse. Another child leapt, then another. 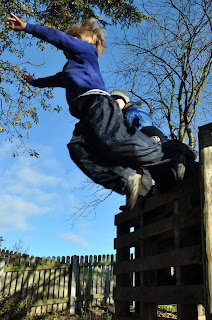 What fascinated me is the play behaviours that I observed in these children, who are aged four and five were identical to the play that takes place on self-build adventure playgrounds. I spent some time as manager of an adventure playground and this sort of deep play was common. Deep play, is defined by Bob Hughes in his  book A Playworkers Taxonomy of Play Types, 1996 London, PLAYLINK, UK  as  play which allows the child to encounter risky or even potentially life threatening experiences, to develop survival skills and conquer fear.
There is a view that this sort of play is uncommon in  the early years stage but there was nothing that I could perceive that distinguished this from the play behaviours of  much older children. For some they were truly overcoming some deep fears and apprehension, their trepidation palpable as they climbed for the first time and stood on the top of the pallet. Others, seeing another child leap, were straight up and over, crashing into the mat. Some would jump from a sitting position. Each child, assessing, choosing and managing their own level of risk taking. Their confidence building with each turn they leapt again and again. 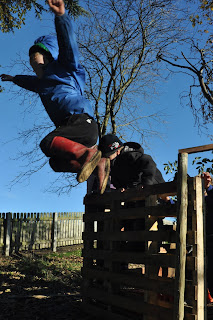 One boy was desperate to be part of the leaping but his fears kept overcoming him. He would climb on the pallet, getting higher each time before deciding it was too high, climbing down and coming to lean against me. I tried to help him recognise the achievement of climbing to the top and the teacher encouraged him to try jumping from a sitting position, as others were. He climbed again but didn't jump, instead he chose to swing down on the door frame. For him this was a challenge as great as leaping in the air from the top of the pallet. What constitutes deep play will always be different for every child. He reminded me of a group of boys at the Adventure Playground who built a jumping tower with platforms at different heights. One boy was involved in leaping from the lower platforms for a whole week before he climbed to the top platform. He must have spent over an hour waiting on that platform watching his friends before he felt ready. Once he had made that first leap he had overcome that fear and jumped again and again. 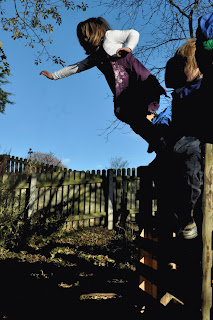 What I really love about working alongside the teachers and children in this particular setting is their acceptance of the children's desire to take risks. Perry Else in his book The Value of Play, London, Continuum books 2009,  says
"The aim of deep play is not really to die but to experience the thrill of close encounter, letting us know we are fully alive and so helping us conquer our fears. Quite often when adults see children engaged in deep play they may feel compelled to intervene to keep the child safe. This then results in children who may feel unable to take risks on their own terms. We need to understand that taking risks is helpful to children in building up their resilience to the challenges of the world."

The role of the teacher and I was to make sure everyone did take any risk on their own terms, that no one felt physically or emotionally pressured to do a jump they didn't want to do. Some children watched or stood at the top of the pallet for quite sometime before they decided to leap or climb back down. With a press of bodies behind waiting for a turn it could be a challenge to give each child the space and time to decide how and what they wanted to do. 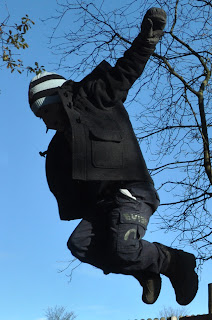 The addition of a heap of cloaks deepened the role play element of the leaping as batman, 'wonder-super-hero-girl', Ben-10, and Buzz Lightyear leaped onto the crash mats. One child's play was in the role of Ben-10 (a cartoon boy who transforms into a super-hero alien) Each leap he made was prefixed with a complex summoning of elemental forces. The control and concentration on his face reminded me of a tai chi master, so deep was his level of immersion, the stillness and control in each of his actions. 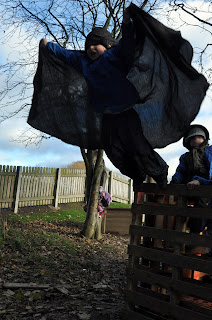 Over the course of the afternoon they leapt, leapt and leapt again, there never seemed to be a break in the flow of children.
When I got home that night I picked up the book I was reading, which is a book of articles by the writer Tom Robbins. In this book I came across the word 'approfondement'. Robbins describes it as "a marvelous French word which roughly translates "as playing easily in the deep". That's how the afternoon had seemed, like we were playing easily in the deep. 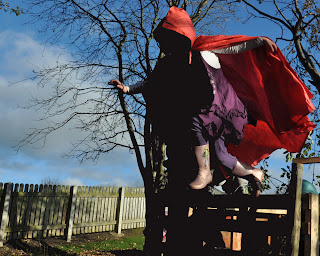