I’ve been mulling over in my mind whether I should write a ‘how to’  for making simple animations. This is mostly because I am still learning and trying things out myself, but, it is so exciting I just have to tell you where I have got to so far.
I first tried to do an animation some years back using my niece’s and goddaughter toys. These were kind of successful, in that things moved and I recorded it but they were really clunky and the only programme I had to work with was power point which wasn't so easy to use.
Then I noticed I had something on my computer called Windows Movie Maker  (WMM)and with a group of 8 and 9 year olds we did an animation of a giant seed growing, which worked out alright but there were a few things I would change. (sadly I can’t put it on here because I don’t have photo permissions for those children)
The first thing I learnt is it is much quicker if you change the length of each slide before you add all the photos rather than altering them individually. On WMM this is pretty easy to do (see below) but it took me ages to find it. (Under tools > options) 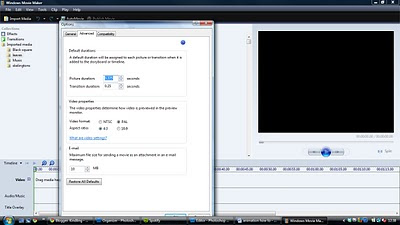 One rainy Sunday I got a pile of autumn leaves and tried again.

If you look in the corners you can see where I marked how the camera lined up. This is to make sure what I was doing with the leaves didn’t go out of the frame. I also found that using a tripod and remote shutter release meant I didn’t have to get up and go back to the camera all the time.
Once you have a big pile of photos all in sequence they can be imported from the camera onto the computer and from the computer into the programme. These can then be added to the timeline in order. With these pebbles, which were part of an animation I did with some 3 to 5 year olds they made shapes and patterns on the table first and then we took the pictures as they moved them around and took them away.  This sequence can then be reversed to make it look like it is starting from a blank screen and filling up. 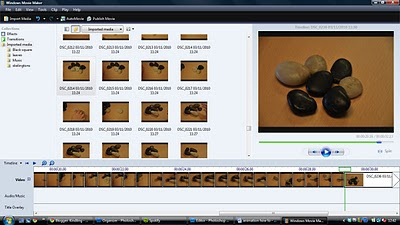 You can stretch some pictures so they last longer, add transitions, like a fade transition which blends each picture smoothly into the next. I keep playing it back over and over to see if it is working. 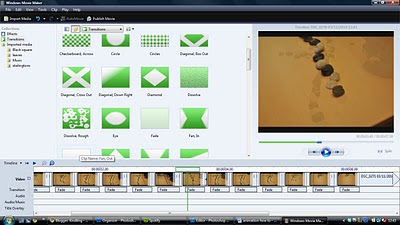 Once I have the basics together it gives me a feel of the rhythm. This helps me choose the music. I did an animation with some more 3-5 year olds last week of some skeletons they had made. I kept watching it and wondering why it didn’t come together. Then we found the right music and the whole thing was transformed. I’ll add it here when I have permissions to use the children’s photographs as they feature in it doing a wonderful dance, with a skeleton. The music is imported into the programme and added to it's own line. The spikes of the rhythm help line up with  the action. 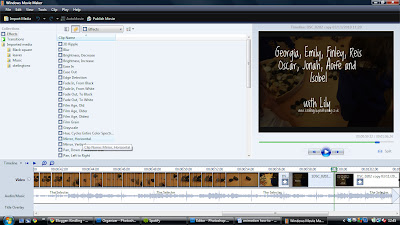 Once all the elements are in place you can add titles and credits. All of the tools needed for this are on WMM, I just kept trying all the different tabs to see what they did.
Then the animation can be published to be played back on your computer, and uploaded to a video sharing site like youtube.

There are some useful articles here : http://www.stopmotionanimation.com/handbook/ that should help you if you want to take it even further. The things I found most helpful were
·         Fixed point of view, using a tripod
·         Remote shutter release meant the children could take the pictures without knocking the camera
·         Keep the moving elements simple
·         Lots of trial and error
·         You can double the length of your animation by adding the photos in sequence going one way then pause and reverse the order to go back to the first photo again
Posted by Lily Horseman at 13:08