A tree house the colour of sunset

After the popularity of the work bench in the Atelier I was reflecting on how we could keep developing our skills with the tools and make a collaborative project. I also wanted to take the work bench outside.
Over the next few sessions we have some different tools, like drills and different size nails and pieces of wood.  We also have different things to hammer into, like corks and conkers.
We talk about what we are making and I ask what we could make outdoors if we had big pieces of wood. Maraaya says “a cat” Jonah says “an aeroplane” Frank says “a tree house”
I can see a tree house being a project that would interest lots of the children and would offer play value during and after the project.
I ask what we would need to build a tree house. “Lots of wood” says William.
It just so happened that I spotted a pallet on the top of a skip not far from the school. I was raised in the noble art of skip diving from a very early age. As children we used to go out with a shopping trolley collecting wood to build chicken houses for our 'poultry farm'.
The pallet caused lots of excitement and we dragged it into the wild area at the top of the play area.
“It is like a ladder” says Jacob. With the pallet resting on the tree they can climb up it to get to the tree. “It isn't a tree house though” says Frank.
“Well lets make it into one then.....” 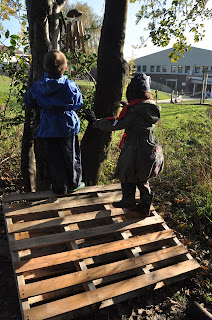 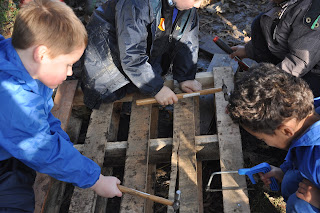 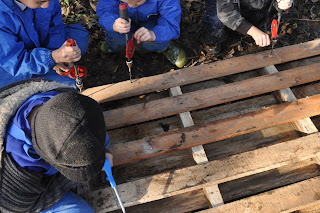 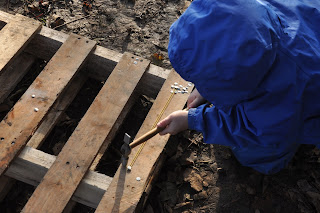 The next day I bring a second pallet and we start with the tools on that one too. Hammering it, sawing it, drilling it and prising the cracks open with the screwdrivers.We have worked really hard, but in terms of output we now have two pallets with small cuts, nail patterns drilled holes and some loose planks. The pallets work really well as workbenches, they are really stable, children can work all the way around and on top of them without needing help with clamps or stabilising their wood. 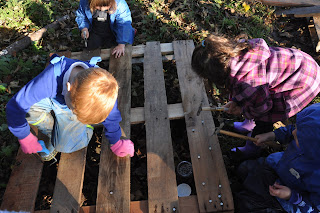 We talk a lot about what the treehouse will look like. “It should be painted with rainbows and teddy bears” says Frank. He runs off and comes back with red paint. Georgia fetches yellow paint. There is a lot of paint. 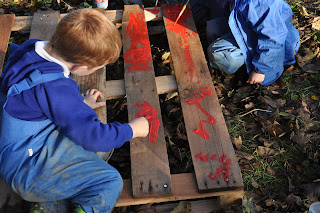 Some of it covers them, their waterproofs and three or four people have arms that are entirely painted red. Our pallets are looking beautiful.
Oscar looks up into the tree, concerned about how safe it will be. "It will be very wobbly" he says.
"Then we could tie it in to the tree" says Frank,
"We only have the very thin string in the making area" Oscar points out
"We could make it more like a Wendy house" says Frank. 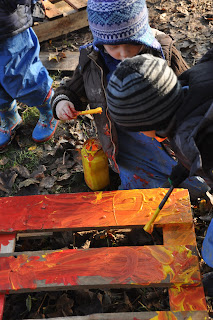 I am at this point a little relieved. I had been following their suggestions right up to this point, they brought the ladders over to check all the trees and declared them safe. But the size of the trees wouldn't really support a platform at a low level and building it higher up the tree would mean a higher level of supervision than the setting could manage on a long term basis. Which means that whatever we made would have to be very temporary. Frank is going to do some drawings to show us how it will look, and I have too. Whichever way our construction takes us next week it is shaping up to be an excellent tree house (on the ground). 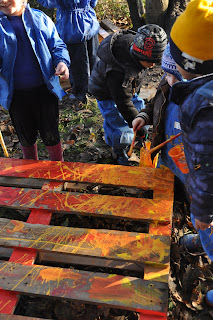 Oscar looks closely at the painted pallets. “They are the colour of sunsets” 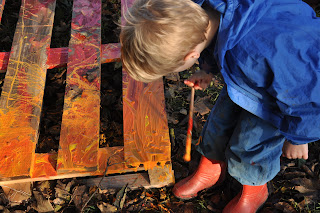