We move from process to product

Last week I began a child led project with a foundation stage group of children to build a treehouse. It was a very process oriented project. The children were content to have moved from hammering, sawing and drilling  around a table inside, to have moved to hammering, sawing and drilling around a pallet outside. This week however they were very keen to have something that felt like a tree house. To the two wooden pallets and small pile of wood I added some fence posts.
We started off by reviewing the photographs of the previous weeks work, talking about tree houses, and drawing some designs. This led to some massed pottering around outside hammering a few nails into the wood and moving wood around. Safa and Oscar find a sketch I have drew over the weekend. "Look these are the plans! This is how we build a tree house" Two children tried to get the fence posts to stand up in the ground so I ask what we could do to make them stand up. Someone suggests we could dig them in. In no time someone has got spades and trowels and the children are all engaged in digging holes.
I am sure most building sites don't down tools every time someone finds a worm. That is where most building sites are lacking in my opinion. 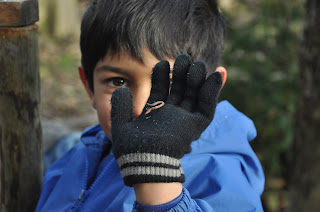 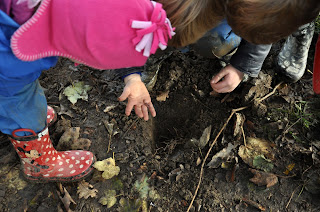 The hole is prepared and the worms are investigated. I want the structure to be strong enough to support whatever play happens in, on and around it. So at this point I introduce my secret weapon. Fortunately both my partner and myself hoard tools and we have this 'kadunker'. In case you have never seen a 'kadunker' before  it is a big metal thingy with two handles, it goes over the top of the post to bang it down into the ground. I asked the children to stand away from the post whilst I 'kadunked' the post into the ground. They were fascinated by this and counted how many times it took before the post was banged into the ground. 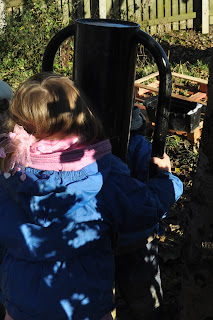 The 'kadunker' is too heavy for the children to lift off the post, but by swinging it back and forth they found they could make it ring like a bell.
In my mind we would have a post at each of the four corners and the pallets running in between them. This is a child led project though, so what goes through my mind isn't going to be how things turn out in the end. After we had stomped the earth back into the hole for the first post someone points to another hole about a foot away. "This is where the next post goes."
I'm not one to waste the effort of a well dug hole so I Kadunk in the second post. 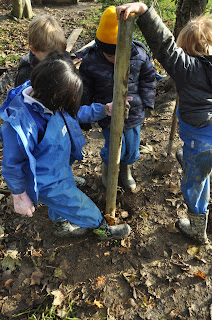 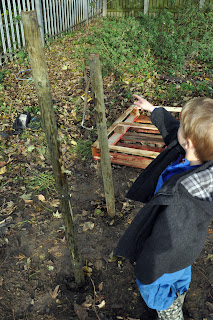 This provided us with a fantastic opportunity to check comparative heights, how much more kadunking would it take to make the posts the same size? There was lots mathematical language in use.
So now we had two posts that were really close together. Which wasn't what I had had in mind. As I was safely stowing the kadunker out of the way someone else spotted exactly what we had made. 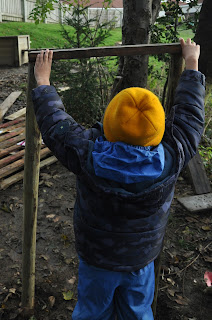 "Look it's a doorway!"
This piece of wood fitted exactly, just the sort of serendipitous find that sets of the next course of action. This was really hard wood, so I suggested we drilled it before we hammered it in. 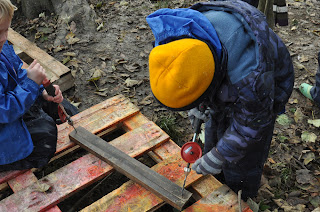 Even though the snow started coming down the children remained extremely motivated and focussed. 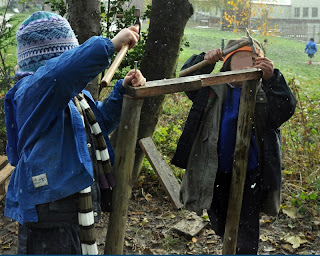 The thing that I wouldn't have predicted about this project as it has developed is the high level of involvement of girls. About thirty children have been involved to this point. There is a core group of four children that have been working on this project almost all the time, one girl and three boys and about 40 per cent of the children involved have been girls. 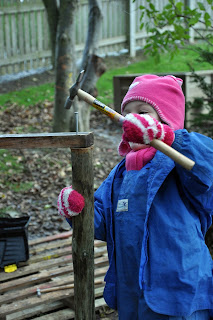 We had a very interesting discussion about who was the 'boss' at one point, prompted by that girl who has been the most involved. After one spell of pottering around and talking about what was going to happen next she said "right then" and picked up her tools in such an authoritative, 'lets get on with it' sort of way that one of the boys said "She thinks she is the boss" another said "She can't be the boss because she is a girl, only a man can be a boss".
This is a setting that has an all female staff team, and the school has a female headteacher. So I asked them to think about who were the bosses in the setting and in the school. They offered a few suggestions as to who was the boss that reflected their experiences or their own teachers in the setting, all of which were women. "So can a girl be the boss too?" I asked proud of our incursion into gender politics, "Well, Amanda could be the boss because A-man-da sounds a bit like A-man" one of them pointed out helpfully.
At least the phonics teacher would be pleased with their ability to sound out words. 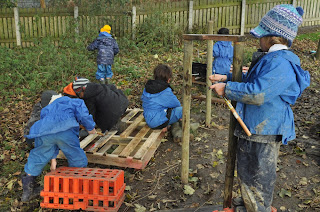 Each morning we have been reviewing progress using photographs and drawing plans. 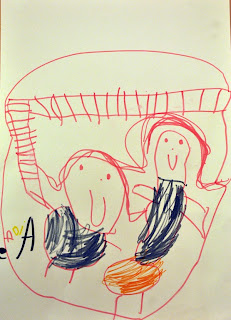 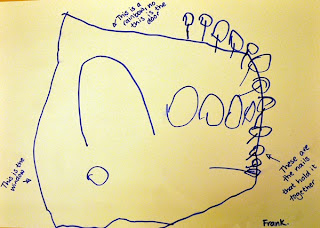 Just some of the tree house designs 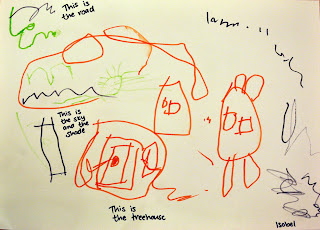 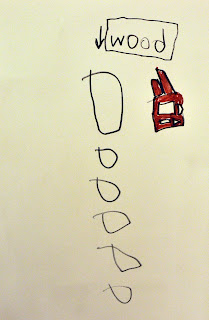 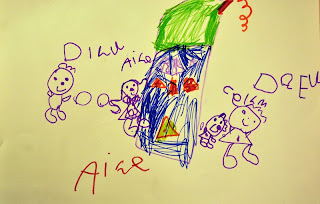 A third post was positioned in the same way as the others to one side of our new doorway. This meant that we could get our first wall up.  I asked them how long they thought it would take from this point to finishing the tree house. William said "six weeks", Someone else said "forty weeks" 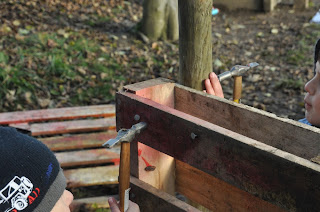 I think I have met builders like this before. 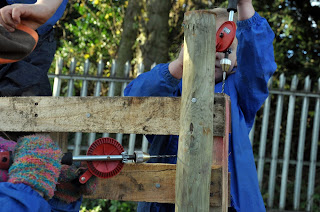 Each hole drilled, each nail banged in is the work of three or four people as they take it in turns to complete the more challenging tasks. 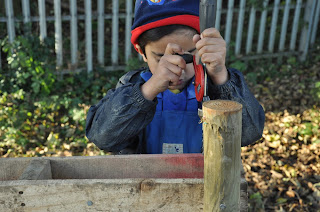 As they have started to see how the first wall has gone up the second one went up more quickly. By lunchtime we had two walls and a doorway. We had already tested the strength of them in the building as the builders climbed on them, sat on them, swung from the doorway and checked every part of them with drill, hammer and saws in hand. 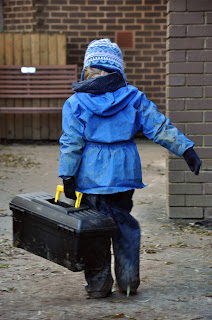 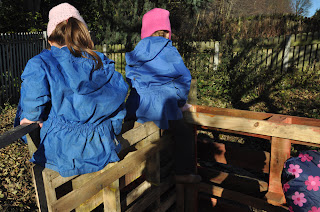 We definitely have something we have built now. Something tangible, something that is a product of our efforts rather than a concept. And it is recognisable as a house. Five girls who hadn't been involved with the building came out while I was checking it over after lunch. They immediately started to use it as the basis for some complex socio-dramatic family play.
Oh! but wait to see what we did next.
Posted by Lily Horseman at 20:13