So far this week we have only had to down tools to deal with an injury twice. Once for a very small cut that needed a plaster and once for a finger, that got hit with a hammer slightly harder than all the other times we hit our fingers and thumbs with a hammer.Not a bad record from almost two full days of hammering and sawing by a group of children aged between three and five.
This week I have started a project working in an atelier, or studio, based in a Foundation stage of a large school. The Foundation stage is inspired by Reggio Emilia and the Atelier is kitted out with plenty of creative resources. I didn’t quite know how this was going to start this week. I knew the staff and some of the children from a Forest School project in the spring but I noticed how wary many of the children were of a stranger in their nursery and reception.
I felt that it would be hard to work from a child led point of view until I got to know the children and they got to know me and that lots of exciting projects wouldn't develop until this relationship developed. The first morning I caught up with a few old friends and we drew and made leaf rubbings as we chatted about our memories of going to the woods. In  particular the children remembered cooking popcorn over a fire during the last session. It was exciting to hear the memories of a boy who previously chose not to speak in nursery and gradually, as he gained confidence and enthusiasm during the Forest School project chose to talk to us in the woods and then in back in the setting. Now, he chatted away about the things he remembered and introduced me to his friends.
We made lots of full size self portraits drawing round their bodies, and the art works spread out all over the floor and round the corner. It was a great way to spend a little time one to one with lots of the children. 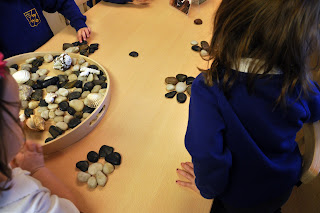 The second morning I put a tray of pebbles on the table along with some pictures of stacks of pebbles. I am keen to do some more animation so I set up the camera with a remote shutter to record the pebbles as the children moved them around.  It was as this was coming to a natural end that someone took notice of the work bench that is in the atelier and that, is when the sawing and hammering started.
There is room round the bench for six people to work at any one time. For all the rest of the day these places were constantly occupied.  It was mostly the older children and the more confident ones who chose to come and work with the saws and hammers, some coming back a number of times throughout the day. We had to develop a system for queuing, with a list for who was next in line for a space round the table. So for most of the day we were busily engaged. The children’s persistence and patience was incredible. Even during the course of a day I saw their hand eye co-ordination improve. 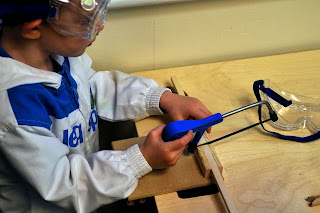 On the next day I started out working with a group, helping them extend a provocation about skeletons that they started some weeks ago. We brought the skeletons into the atelier and did some animations with the bones. The children loved passing the remote shutter release button around to take the photos without  moving the camera which was mounted on a tripoid. Again as this was ending a child came over and said “Lily, I would really like to finish my sawing.  Please can you get me a saw.” 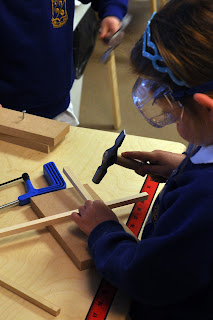 Quickly all the work bench spaces fill, with a queue of 6 or more either watching or drawing as they waited for their turn. The quieter, shyer children used the opportunity to watch before they took their turn. One of the smallest nursery children came and watched, even though she wasn’t really able to express clearly with language what she wanted, she wanted to have a turn. She waited for such a long time but watched the others as they worked. Really patiently she sawed at her piece of wood, when she had two pieces of wood the look of satisfaction on her face was incredible. She pointed to the hammer and then to her wood and started hammering away.  When her grandparents came to pick her up she shows them what she has made.
By the end of the day some children are really tired with the effort and concentration they have put in. But for the amount of constant use of the tools for nearly two days we only have one cut and that one bashed finger. Children know the risks and are really careful for most of the time. The tools were always put away when they weren’t being used and I had to manage the numbers around the table as the observers got drawn into watching too closely. 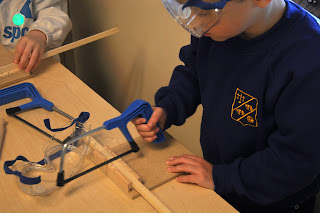 For every generation, except the last few, mastery of tools and the ability to make things with our hands has been a key to our survival as a species. In another blog post I would like to explore the theory of recapitulation in relation to tool use and fires but for now what I am thinking about is; with the popularity of the work bench in the last couple of days, we will do anything in this project other than hammering and sawing? How else can we use our tools? What could we build? I used to manage a self build adventure playground, will we tackle larger scale structures like those we built there? or sculptures with nails in or.....
Posted by Lily Horseman at 21:57