In my early twenties I used to go to Oxford once a fortnight and my treat was to go to the Pitt Rivers museum of anthropology. I was always fascinated by the shrunken heads from the Amazon Basin.

When I found a how to in an old craft book I had to have a try. That was a few years back and I kept meaning to revisit the idea. I had a fine opportunity this weekend.  First get a head, one that isn't being used......actually these shrunken heads aren't quite as gruesome as the ones in the Pitt Rivers but almost... 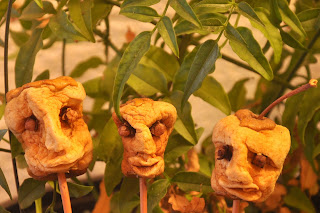 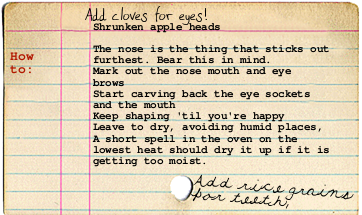 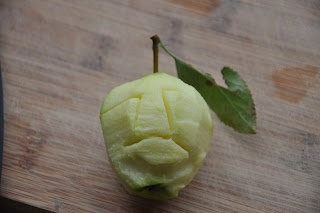 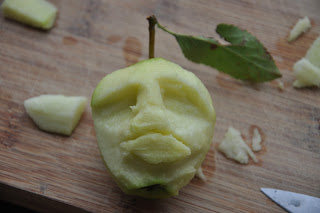 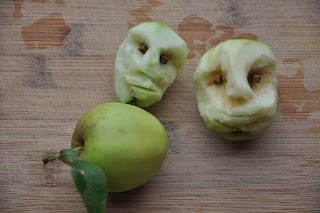 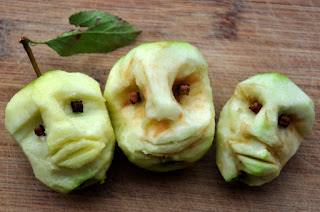 These are some that I made as an example for a group of children of mixed ages and adults as part of a whittling and carving workshop. They used potato peelers for the peeling and the carving and made some fantastic creations, which I managed not to photograph! But they are a great way to practise carving skills on something easier than wood.
Some of them were almost dry after being near a heater over night, It will take differing amounts of time to shrink depending on how warm and humid the place you store them...
The children enjoyed matching pictures of the unshrunken heads to the shrunken version.

I scrumped all the apples from apple trees growing by busy roads, so we weren't wasting apples that could have been eaten. But if you want a fab eating apple recipe, ladies and gentlemen... I introduce 'fabulous Stella's fireside toffee apple'. 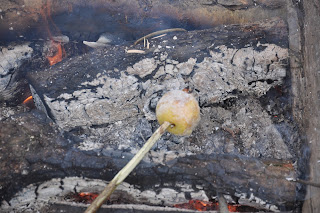 Cooked on a stick over the fire, coated in sugar and cinnamon and cooked for a little while longer until the sugar caramelises. Delicious!!
Toffee apple on a stick  wonderfulness!
Posted by Lily Horseman at 11:11